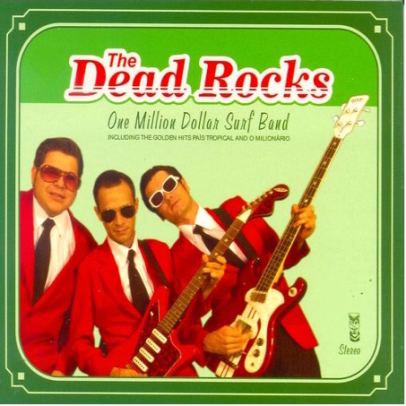 One Million Dollar Band has recently been released in Europe during the second tour of the group through the old continent; they performed 9 concerts in Italy and 7 in France, in a total of 16 extremely successful concerts.

The album was recorded during the year of 2007 in three sessions in the LE BOOT studio. The studio, owned by guitarist Cesar Botinha, warranted the use of vintage equipments and the necessary attention demanded by the timbers of surf music.

Being a surf-guitar record, the most different 50’s and 60’s sonorities have been explored, from the respected Gibson 335 used by jazz artists to the blues sound of the Fender Stratocaster, meeting halfway there the Brazilian vintages Giannini Supersonic and Phelpa Coronado, all spiced up with the peculiar sound of the DiPinto guitars and basses, north-american sponsor of the band.

To mix the tracks, which were captured live, nobody other than Jack Endino was recruited, a Seattle producer known worldwide for his work beside bands such as Nirvana, Screaming Trees, L7, Mudhoney and the Brazilian Titãs. After the mixing process with Pro-Tools system and the use of analog system peripherals the album was mastered in California by surf music specialists Phil Dirt and Adan Myers.

The record brings 14 new compositions of the band, which have influences of the most different styrands of instrumental surf music and also references and techniques of rockabilly, country, “jovem guarda” and of course, rock ‘n’ roll.

The edition in digipack format, paper cover that foregoes the traditional plastic case, neutralized the emissions of Greenhouse Gases from its production, as a result of the partnership of the band and the non-governmental organization Iniciativa Verde, who has been neutralizing the most different products and events through reforestation.

As all of the other band’s releases, One Million Dollar Band will be available for full download in mp3/ogg format under Creative Commons license.

Produced by The Dead Rocks

Music Mix by Jack Endino at Soundhouse in Seattle/WA – EUA

THE DEAD ROCKS is Johnny Cash in the guitar, Paul Punk in the bass and Marky Wildstone on the drums

All tracks written by THE DEAD ROCKS, except “País Tropical” by Jorge Ben and “O Milionário” by Mike Maxfield.

No more entries to show...

© 2018 by Sharawaji Records. All rights reserved. Designed and developed by GECKONET.