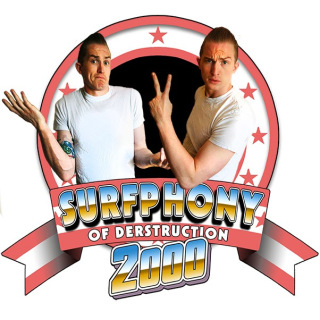 miracle… I’ve survived possession, Judgement Day, the Nuclear Apocalypse, and even a skunky beer from SATAN! I guess you can now chalk up getting lost in time and space to the list of things that have failed to kill me GEEZE LOUISE will it stop?! Probably not, I’m a BAAAAD CAT, always gettin’ myself into trouble and these past few months have been pretty much the norm.

I’m back around again to bring Surf from around the Earth in a manner that only The Big Derboski knows! No sleazy, greezy, cheezy Surf from “Hollywood”, no need to get digital with a glorified nintendo NO we’re just here to bring you the best in FAST… LOUD… AND LOOOOOOOOOOOOSE SURF! WE’RE GOING ANY WHICH WAY BUT LOOSE BABY… SCRATCH THAT WE’RE GOIN’ ANY WHICH WAY WE CAN WOOOOOOOOOOOOO!

NOW you might be askin’ yerself “why is Derk referring to himself as ‘we?’ Does he mean the royal ‘we’?” NO YA FINK QUITE OVERTHINKIN’ IT! When I mean “we”, I mean ME and … THE BIG D.B!

HOLY MOLEY TWO DERKS?! YEAAAAAAAAAAAAAAAAAAAAAAAAAAH TWO HEADS ARE BETTER THAN ONE WHEN YER HAVING FUN YA FINKS! WHAT BETTER WAY TO CELEBRATE BEING ALIVE AND IN ONE PIECE THAN GETTING TOGETHER WITH THE BEST OF THE BEST IN SURF PODCASTS, DERK BRIGANTE?! he’s pretty cool ya dig?

I’LL BET YA DOLLARS TO DONUTS THAT YER WONDERIN’ WHAT THE HECK IS GOIN’ ON! SO GO GET ME SOME DONUTS! I would make it real clear for ya and give ya a real academic explanation but that’s not my style! Derk does a damn good job of it in the episode though so take a listen and find out why there’s two of us here! All I will say is, there’s not one, there’s not two, but there are so many more of YOU WOOOOOOOOOOOOOOOOO!!! TIME FOR A PLAYLIST

SOLID MUSIC! WOULD IT BE ANY OTHER WAY? I DON’T THINK SO! The Big Derboski is mean, lean, and pretty clean and so I don’t know anything about filler! I bring you finks the absolute best in Surf music! From the west coast of California to the Great Lakes of Toronto, Ontario, with a few stops in between, I bring the SURF! HOLD ON I’M NOT DONE YET, As the Reverb Syndicate say, worse things happen at sea, especially when yer hangin’ ten! I’m not content to just sit here on this island and claim I play “surf from around the Earth”. I surf the seven seas to bring the music from all over the world! BUT I wanna go local… Back to Toronto for a moment and talk about some of the bands that I dig there. The NINTH ANNUAL GREAT LAKES SURF BATTLE IS COMING UP AND IT’S SHAPING UP TO BE AN ALL OUT WAR! TWO NIGHTS, TWO STAGES, TOO MUCH SURF WOOOOOOOOOOOO! 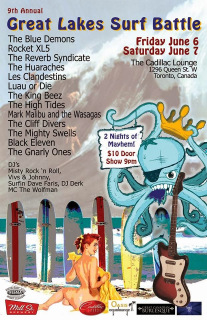 OH WHO’S THE FELLOW “DJ DERK”? I BELIEVE THAT IS ME! shame I couldn’t get my last name on there but when you go by several monikers like The Big Derboski does, yer bound to cause a bit of personality crisis WOOOOOOO NONETHELESS I will be there FRIDAY NIGHT playing some serious Surf tunes for all of you Toronto finks!

Here’s where I have a BIG conflict of interest! Normally I like to place bets on who I think is gonna win the battle but it’s gonna be a REAAAAAAAL tough choice! FRIDAY NIGHT IS ALRIGHT FOR FIGHTING! I got two bands in the battle that I’m rooting for, that being The Gnarly Ones and the King Beez. OOOOOOOH MAAAAAN!

I went to see The Gnarly Ones back in January at Magpie Tavern and they packed that lil bar to the gills. All the finks there just tore the floorboards up! Lotsa fast and loud surf with some real BAAAAD SAX!! I just caught The Gnarly Ones again at The Cloak and Dagger a week or two ago and they may as well get into the demolition biz because they tore the roof off the place! The Big Derboski don’t get scared very easily but I’m afraid of what The Gnarly Ones are gonna do to the Cadillac Lounge…

ON THE OTHER SIDE OF THE COIN IS THE KINGS OF METAL… SURF! THAT IS THE KING BEEZ! I’ve caught ’em a few times when they stop into Toronto and though they’re a coupla BEEZ, they ALWAYS BRING THEIR A GAME!! Last Sunday after I had won a pinball Tournament…
*pinball tourney pic*
I dropped into Clinton’s Tavern to catch the King Beez and it was one helluva show! The King Beez put everything they had into their show and put on one of THE BEST SHOWS I HAVE SEEN IN A DAAAAAAAAMN LOOOOOOOOOOOONG TIME! Matt Groopie shreds with the best of ’em and with the way he was playing, I’m surprised his kustom guitar didn’t set on fire what with the speed he was shredding at! WOOOOOOOOOOOOOOOOOOOOOOOOOOOOO YOU SHOULD KNOW MATT GROOPIE YA FINKS he was on the Surfphony of Derstruction once with my buddy Alex Pulec of The Nursey and The Big Derboski too! We had a helluva time playing surf shellac DIG?